Ohhhhh, Turkey, you captured my heart!  Having recently returned from a very active 7-night journey with Peregrine Adventures, I am excited to share with you some of the many reasons to visit soon.

Yes, today the country has some serious economic issues (as of late 2018), as the Turkish Lira has dipped to just a third of its former value.  This allowed me to spend my US dollars more liberally than I might have otherwise, but I feel for them during this time.  The US government website has a travel warning for the country, but the political trouble is down in the southwest near the border of Syria.  We did not visit this area at all, of course.  But we saw some amazing cities and towns, including the always fascinating Istanbul.

I could go on and on about the wonderful people, food, history and culture that I discovered on our brief journey.  The places visited by our group were safe, beautiful, exciting, and colorful beyond my expectations.  One of the reasons I chose to go along on the trip was the opportunity to ride over the other-worldly landscape of Cappadocia.  Although the clouds disappointed, it was an experience I will never forget.

Let’s take a peek at why you, too, might want to plan a visit to wonderfully exotic Turkey very soon.  Please enjoy my images and decide for yourself! 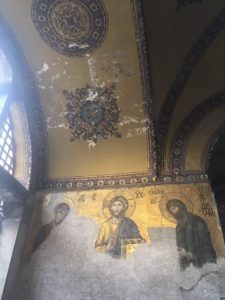 You will want to read more about Turkey if you are a history buff, to be sure.  I won’t detail facts here, other than to share which site you are seeing.  A highlight for me, being raised Christian, was Hagia Sophia, which was for many, many years the largest most important church in the world.  It became a Muslin mosque, during which time the Christian tile work and frescos were either painted over or otherwise marred.  Today it stands as a museum with significance to both faiths, and some of the Christian artifacts have been restored.

Ephesus was also particularly fascinating!  The digs of this important ancient Christian city began in the 50’s, and some of the important buildings are being rebuilt.  It only just received the UNESCO heritage designation in 2015.   Mary’s church lies just outside the gates, and she is reputedly buried there.  I loved the library….magnificent architecture.  How DID they move those stones?  Sadly, slaves were involved, no doubt.  Check out the bathroom for the men.  The story about how they cleaned themselves totally grossed me out! 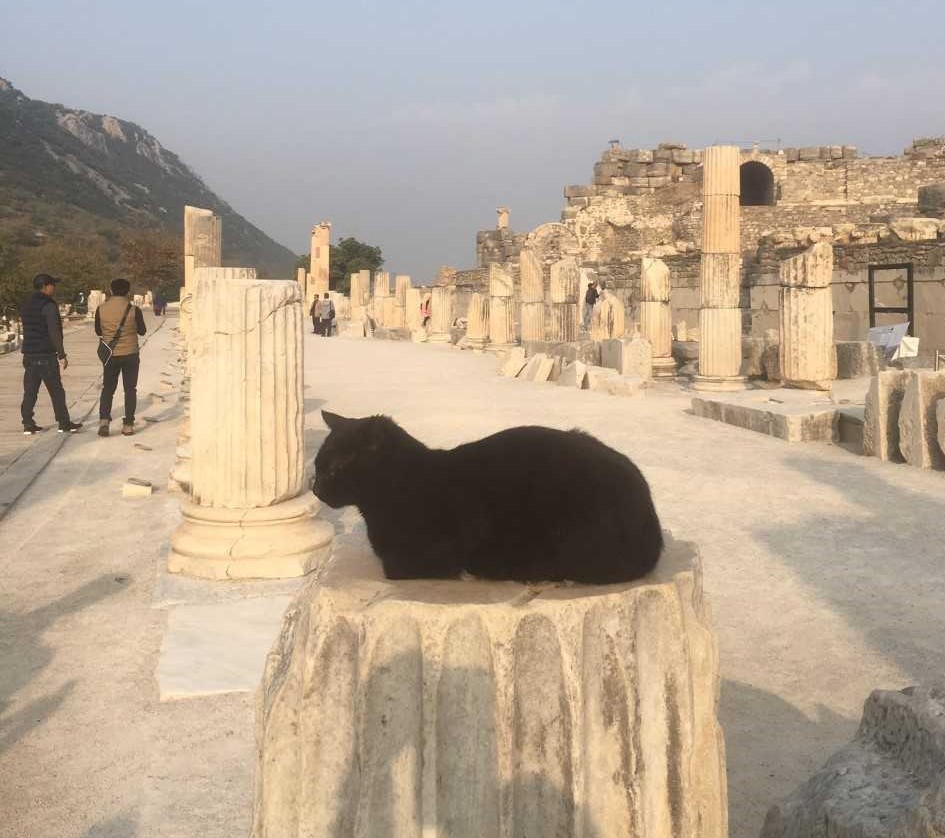 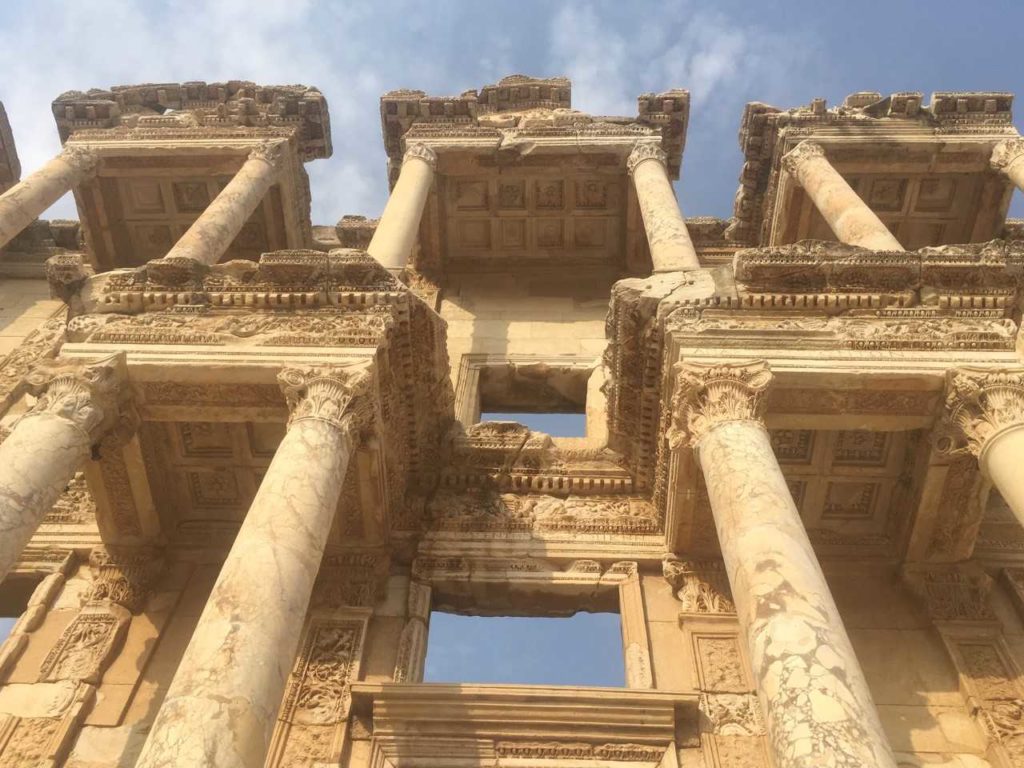 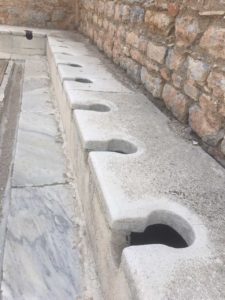 Today Turkey is about 98% Muslim.  My guide said his mom declares Muslim but does not practice and nor does he.  In 1923 the great exchange forced the Christians to Greece and the Muslims to Turkey.  Read more about this sad time in Turkish history here.

One evening we visited a town high on a hill called Sirince.  It was settled when Ephesus was abandoned in the 15th century by freed Greek slaves and has about 600 villagers currently.  We were treated to traditional food at a unique family restaurant, and even learned how to make teeny tiny raviolis.  It was such a picturesque town, with lots and lots of booths selling various gift items. 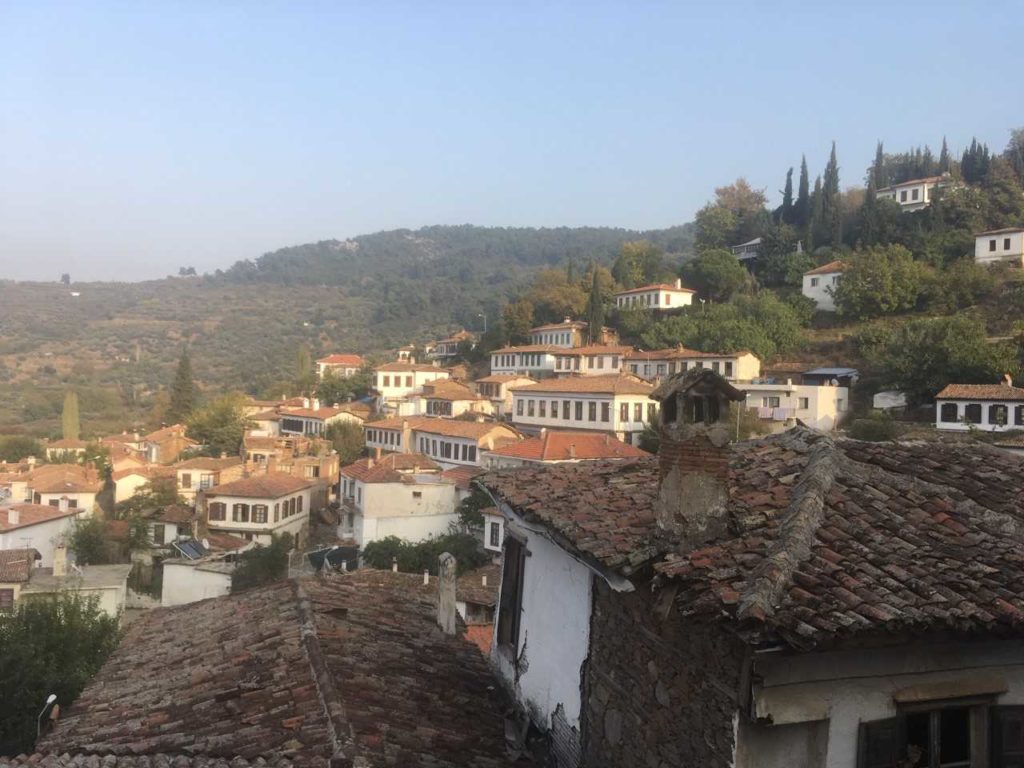 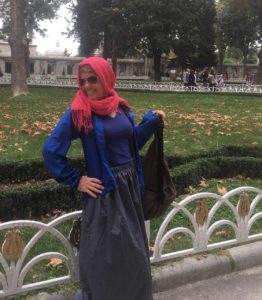 It is customary to remove your shoes when entering both homes and mosques.  I personally love this custom showing respect and cleanliness.  In some sites we merely covered our shoes with plastic bags.  When entering the Blue Mosque, we were given skirts and headscarves if our legs or heads were not fully covered.

The culture is diverse, including elements of Eastern Mediterranean and Central Asian regions,  as well as Eastern European to a lesser degree.  Many were initially brought together by the Ottoman Empire, a multi-ethnic and multi-religious state.  We were treated to a performance of the Whirling Dervish;  what a fascinating religious sect.  The museum in Konya dedicated to this was a highlight for me.  I even bought a book of Rumi poetry to understand it a bit better.  Rumi was a 13th century Persian Sufi mystic, and his religious philosophy speaks to me, even today! 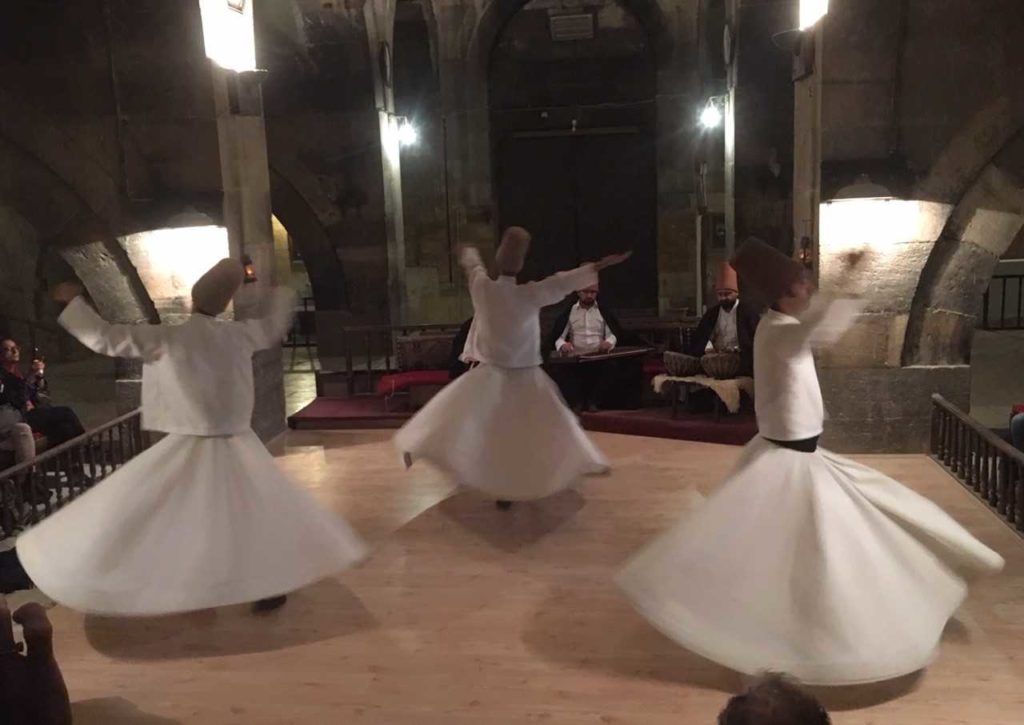 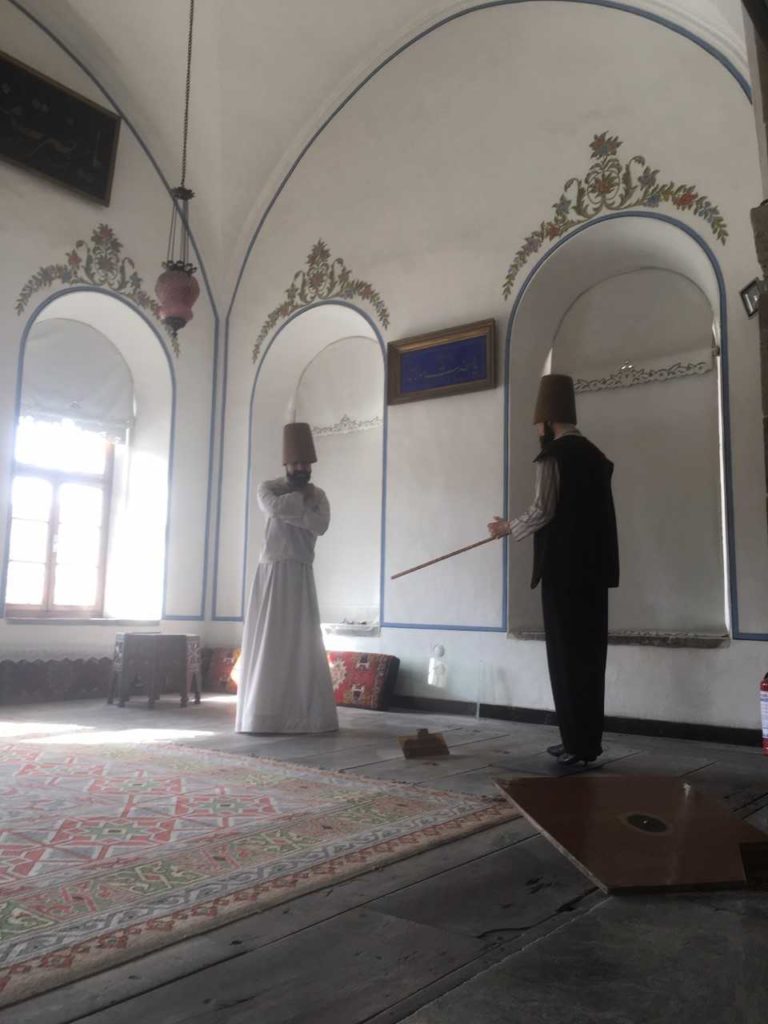 Oh, my goodness, the food in turkey is beautiful, healthy and delicious!  It was such fun to visit the Spice Market, and each meal was more delicious than the last.  It would be very easy to be a vegetarian or vegan here, as lentil soup is a staple.  By the sea, the fish was beautiful, and everywhere we could find lamb, chicken, and beef dishes.  Breakfast was unusual in that I had soup nearly every morning and salads were common, as well as an assortment of delicious pastries.  Cucumbers and tomatoes were plentiful, and the tea and Turkish coffee were fabulous.  I brought some home, and I don’t even like coffee!  I also bought the yummy red pepper blend that was on every table. 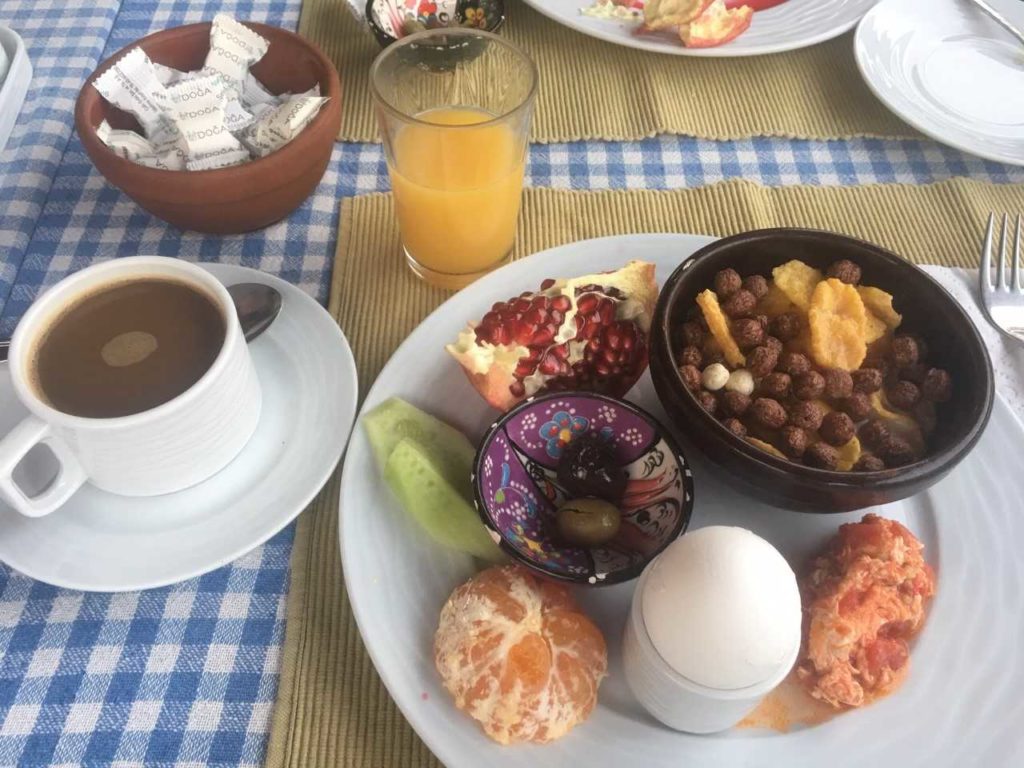 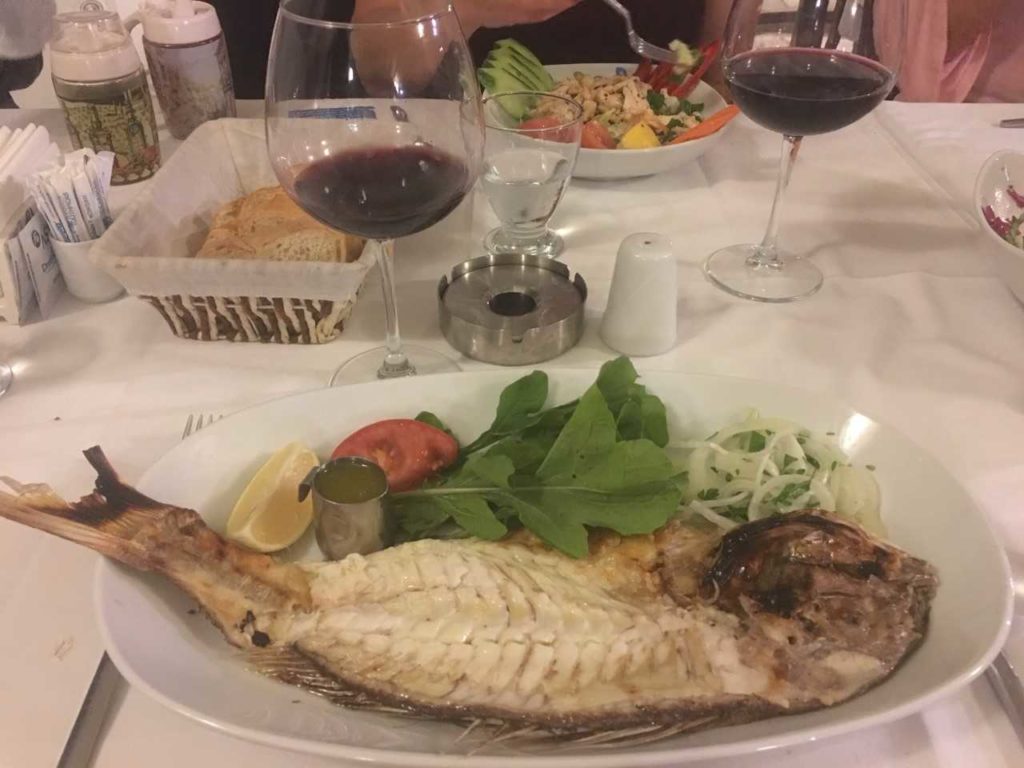 Our visit to the cave home of a Turkish family for dinner in Cappadocia was a special event!  Seriously, I don’t think I have ever had a more delicious lentil soup than hers.  She was charming, as was her daughter, and a gracious host to our group of 12.  This is just one of the special inclusions you will get if you travel with Peregrine.  Here’s a photo of her with Katie, one of the companions on tour with me. 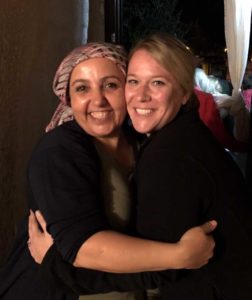 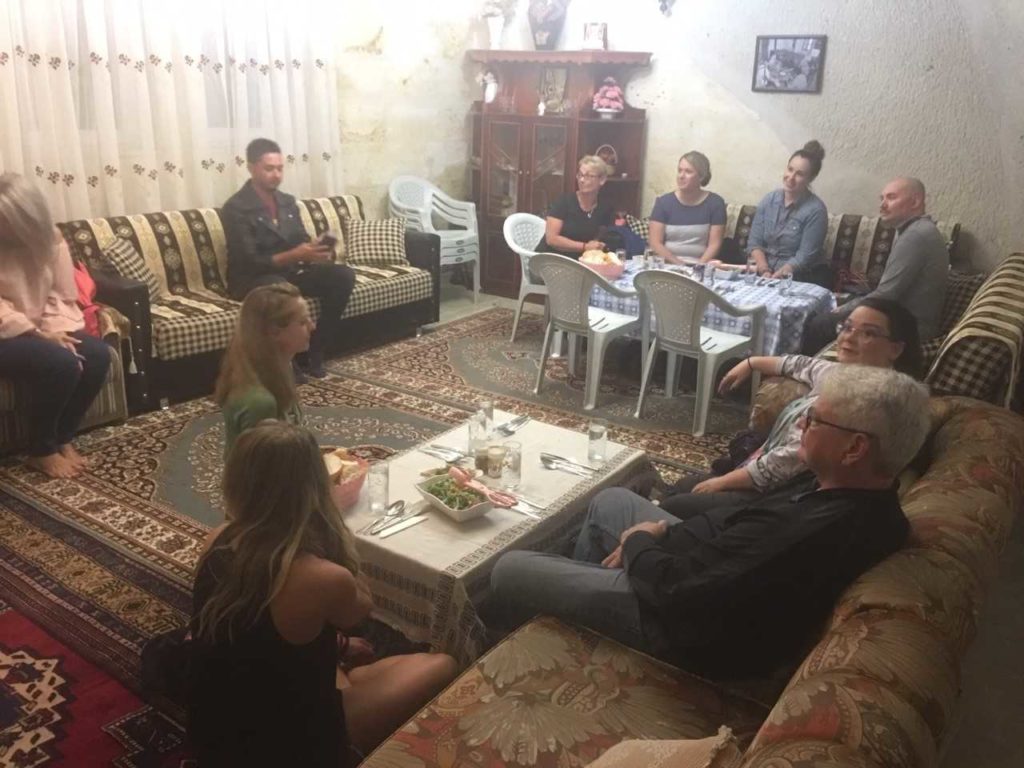 The Cats and Dogs who Belong to the People

The Turks have a wonderful program that protects the dogs and cats who live on the streets and they belong to everyone and no one.  If you find someone abusing an animal, they will be put in jail.  The dogs have tags in the ear, marking that they have been inoculated.  If one is injured, you can take it to a vet and the government will treat the animal for free.  I have a bunch of photos of these sweet creatures.  Here are just a few! 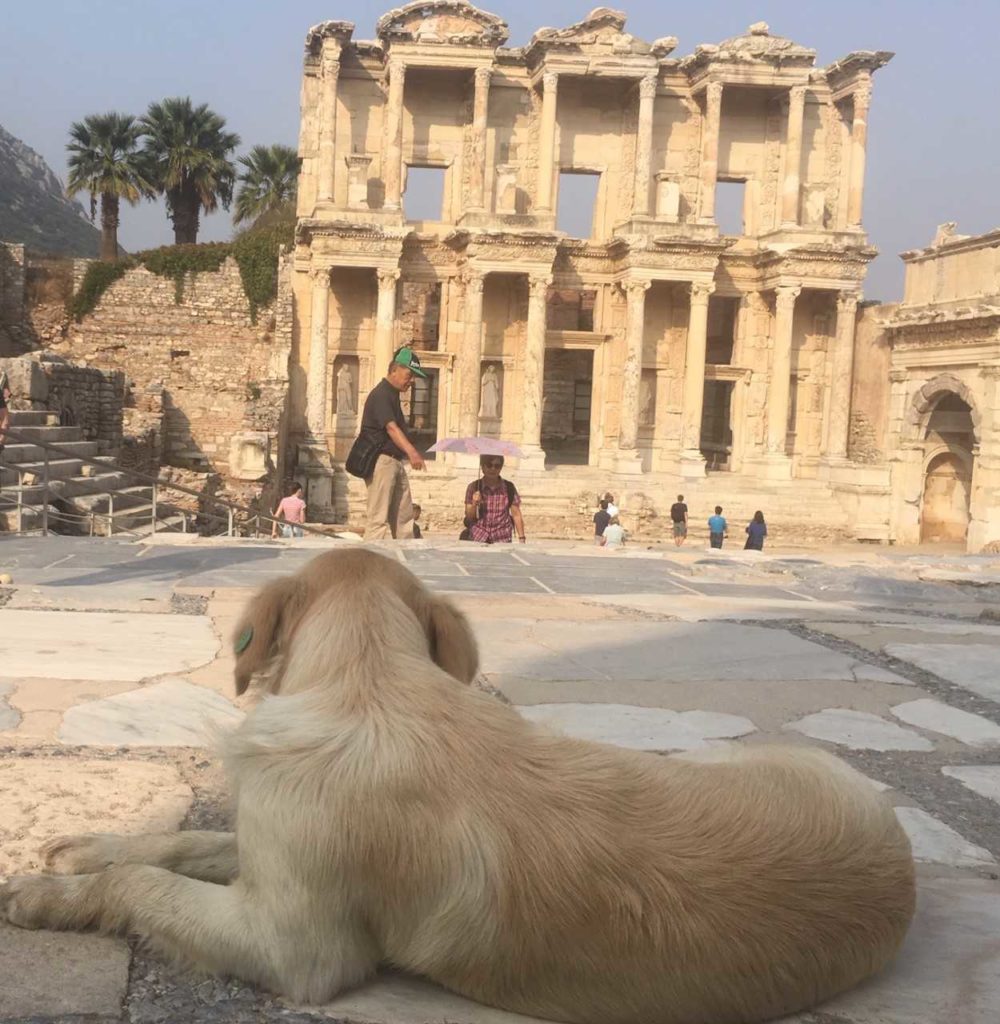 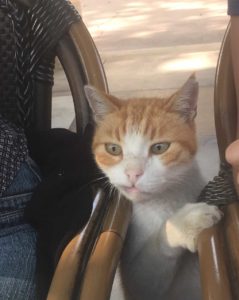 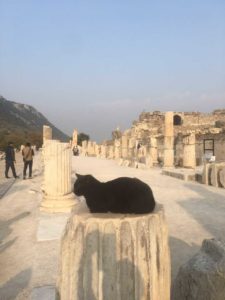 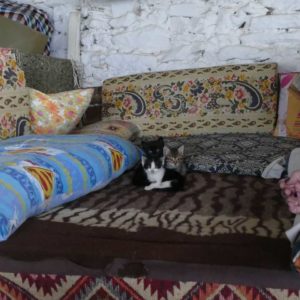 From the sea towns and lakes to the mountains and plains, this is a beautiful land.  The other-worldly destination of Cappadocia was wonderful to hike in.  I absolutely loved the town of Bodrum, where we took a gullet boat ride for a sunset swim in the salty Agean Sea.  We were just 4 miles from the Greek island of Kos!  The history of the caves carved into the Cappadocian spires of rock was fascinating.  The Christians once built churches there and hid from persecution.  The fall weather made it the perfect time to tour the ruins and dine al fresco.  As they say, a picture is worth a thousand words! 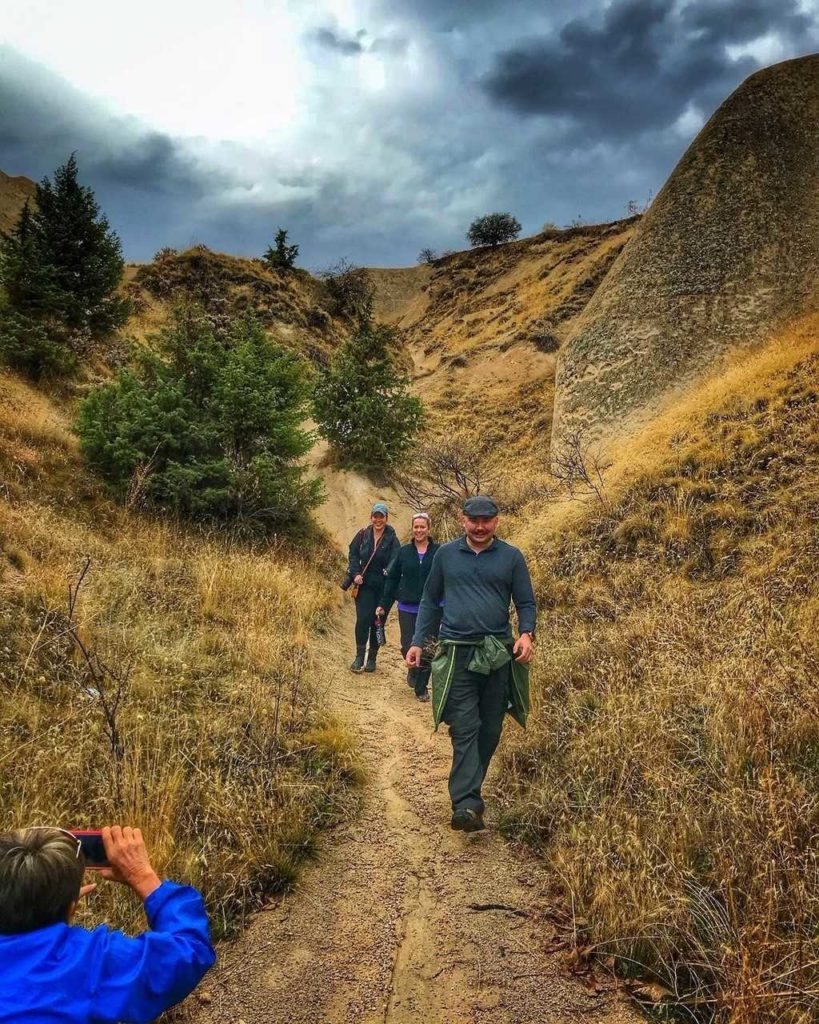 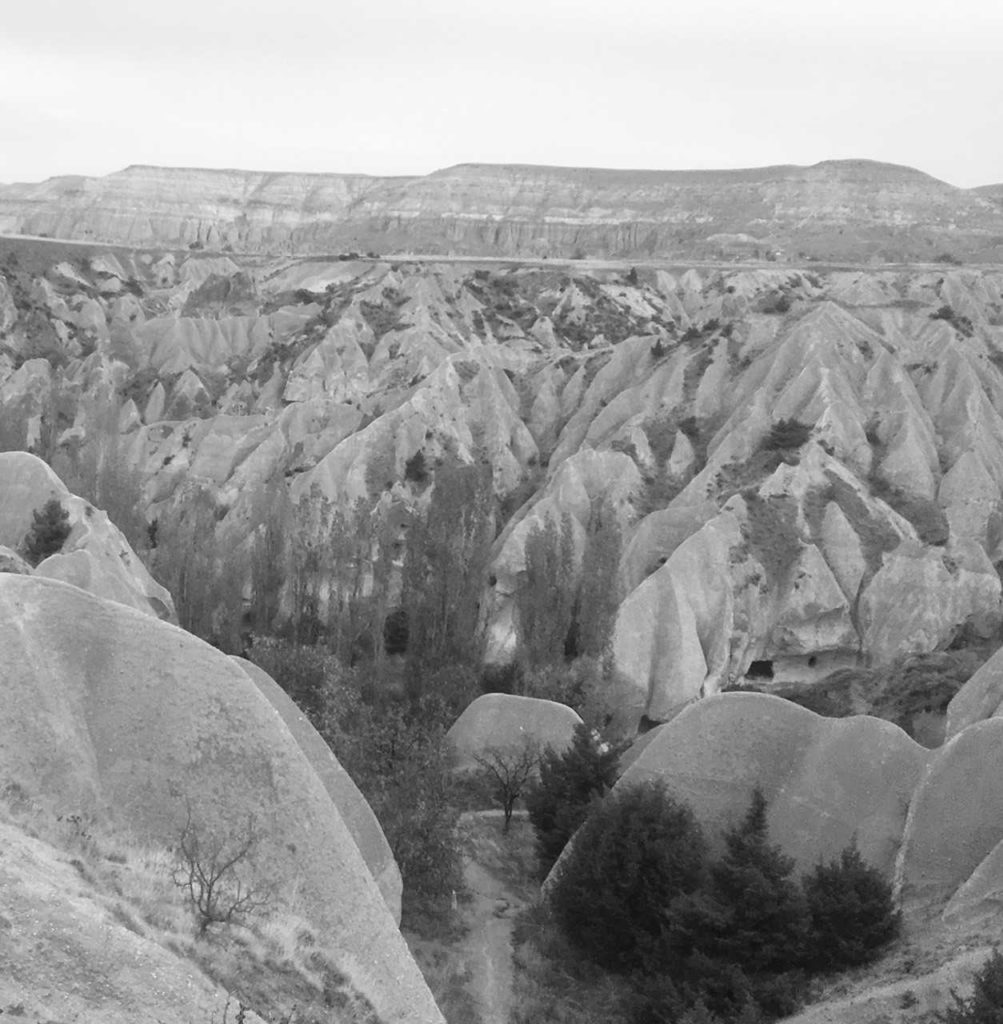 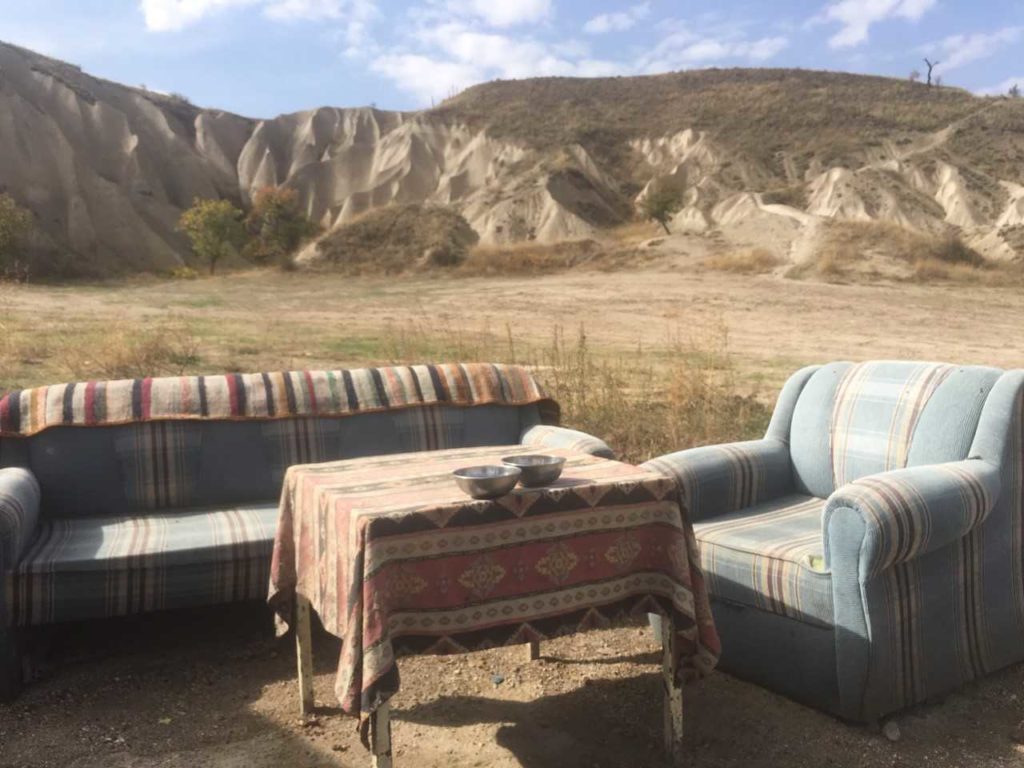 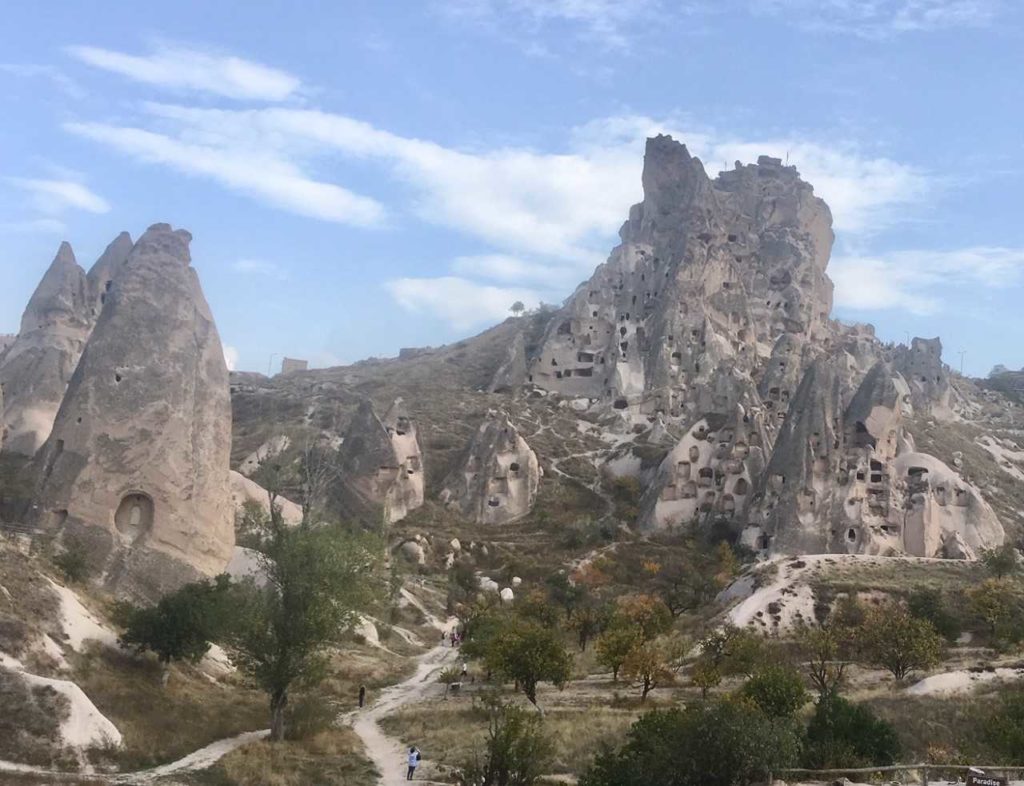 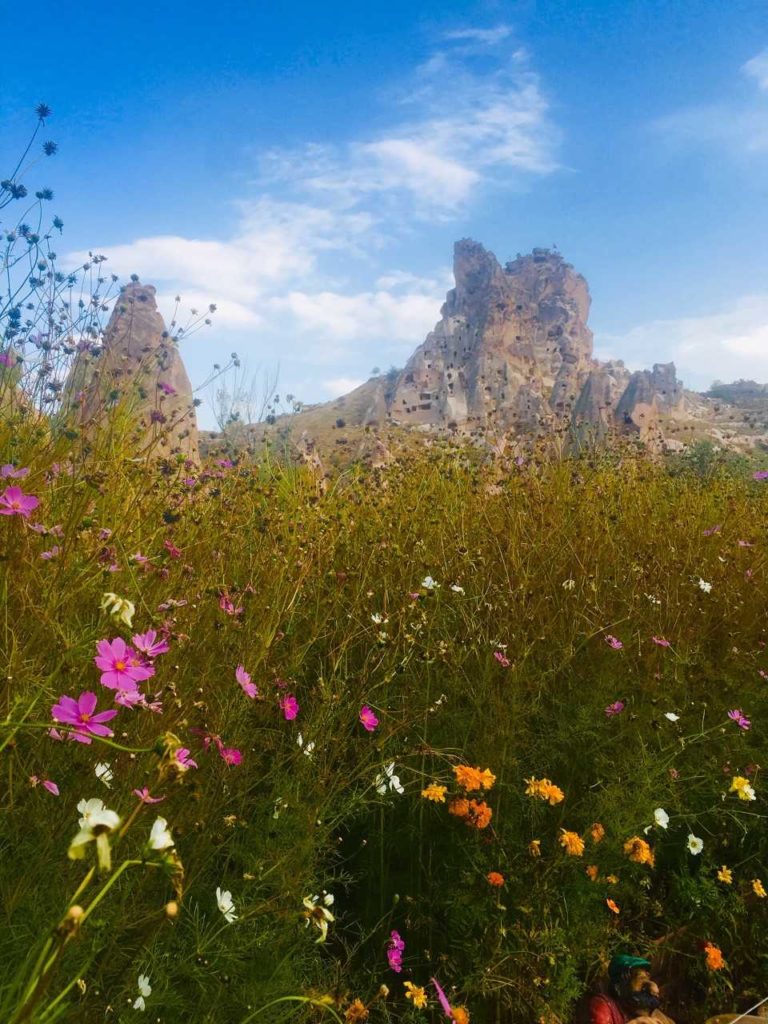 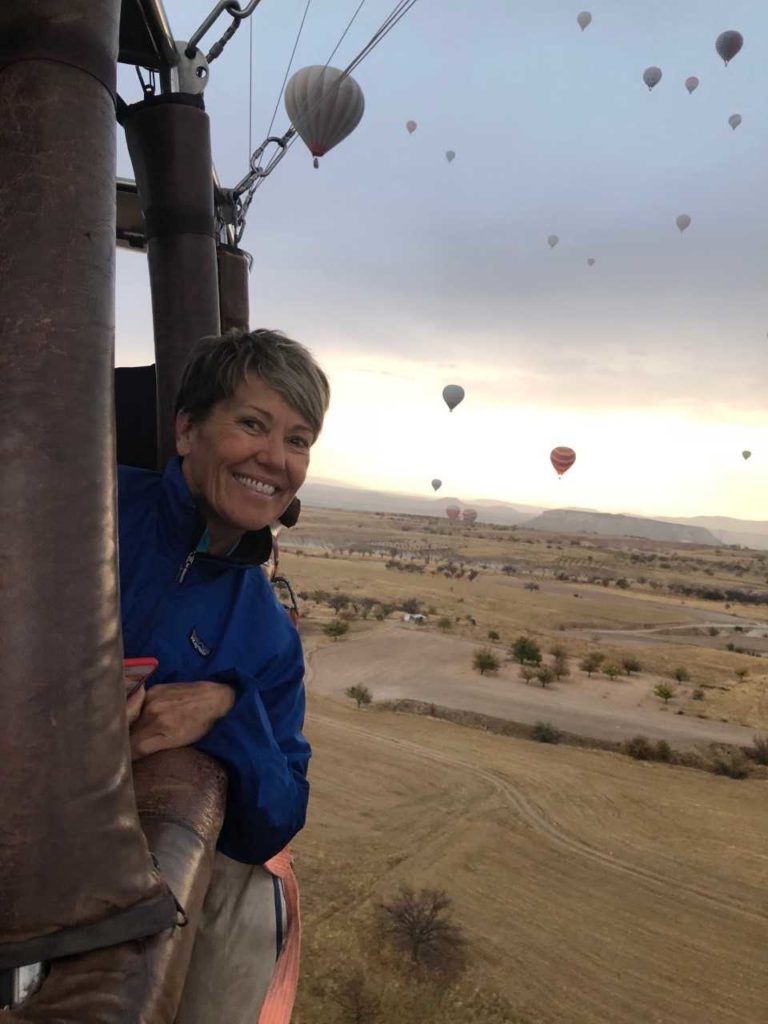 Perhaps my favorite take-away from this journey was that the people are proud of their customs, history, beautiful cities and amazing natural landscapes.  When I visit foreign countries, I like to try to blend in, attempting to avoid being the “ugly American tourist”.  I always felt safe, welcomed and hopefully I succeeded!  I supported the local shops and enjoyed my meals in restaurants immensely.  Our guide Fatih chose these very well.  He was well-respected by the owners of the places we visited, which was comforting. 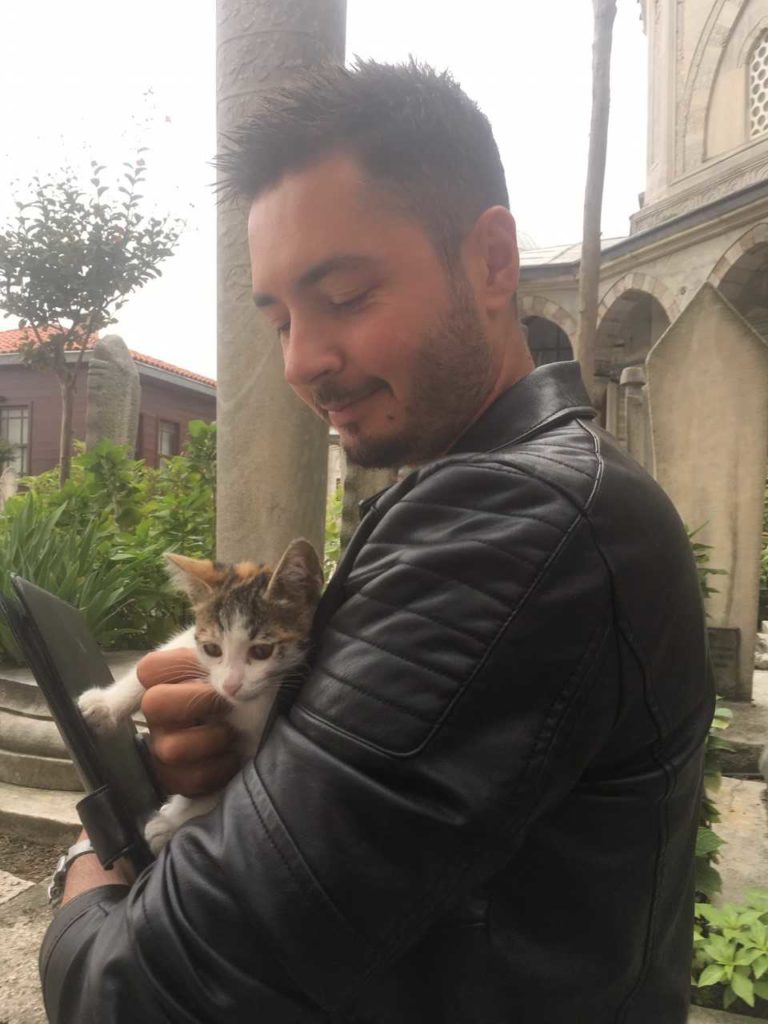 Peregrine Adventures has a wonderful small group opportunity for you.  Check it out here to see a similar tour to what we did.  You will love it as much as I did, and I would be pleased to assist you in making a trip to Turkey a reality.  When I return I would love to join one of their more active tours of the lake district…perhaps adding some biking and kayaking.  There is a lot more of Turkey to explore!  And do it NOW, while you are healthy and strong.  In one week we walked nearly 78,000 steps and 125 flights of stairs!

Here are a few more of my favorite images.  Enjoy! 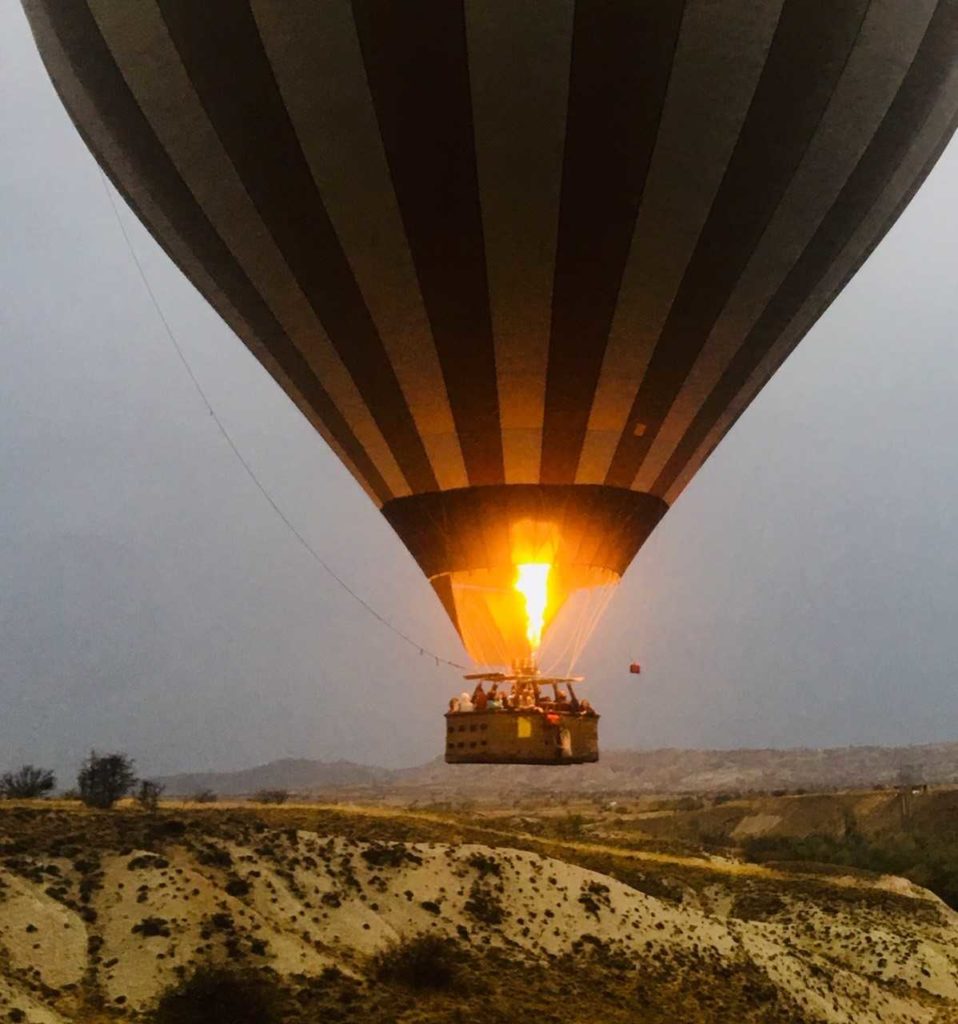 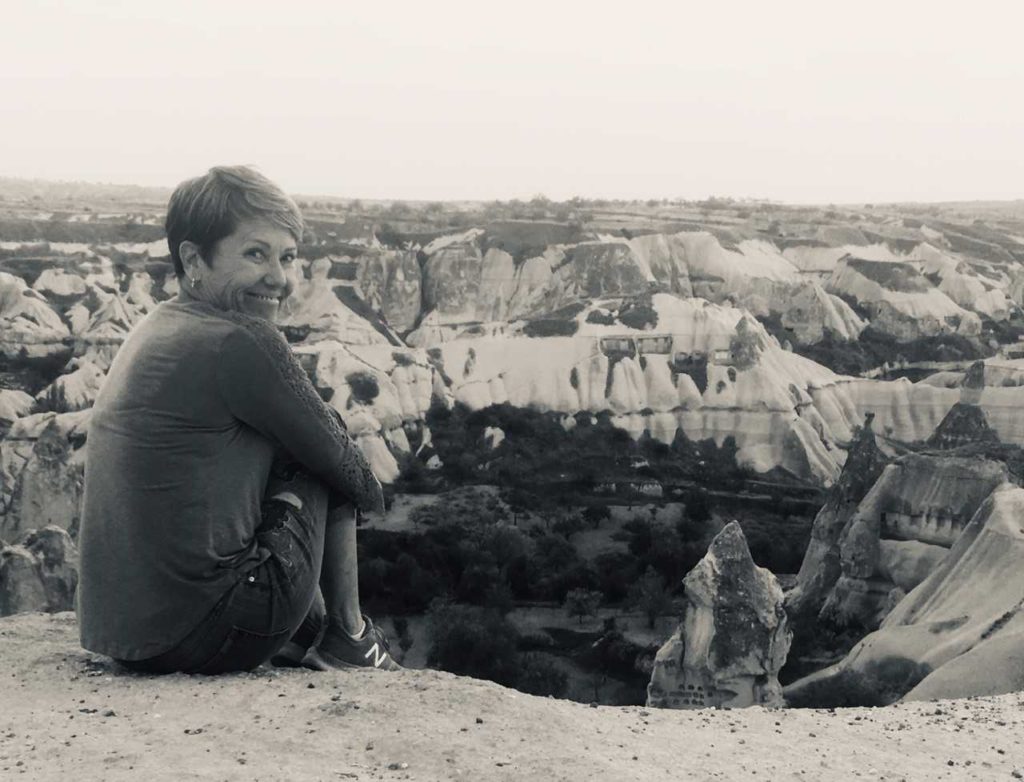 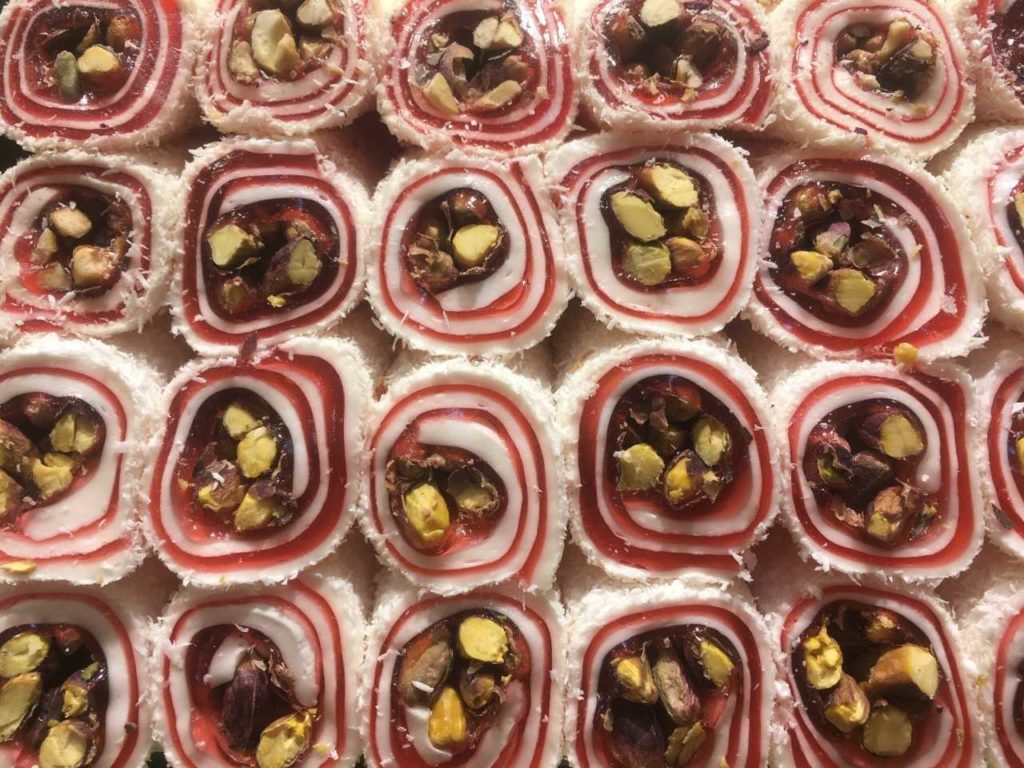 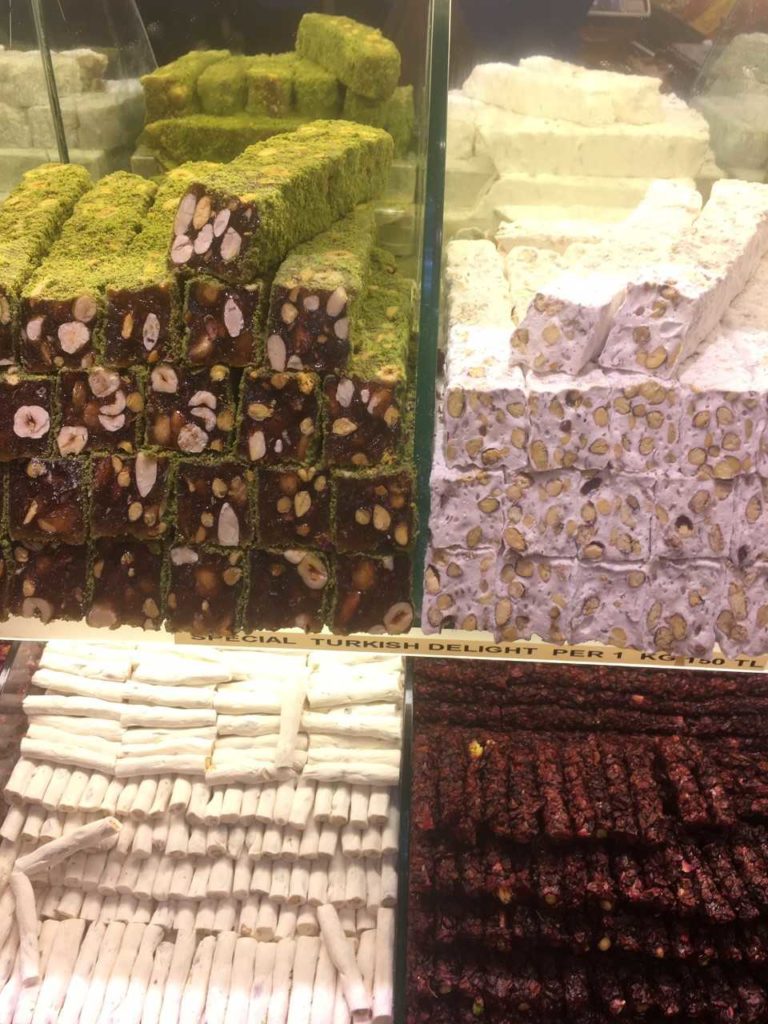 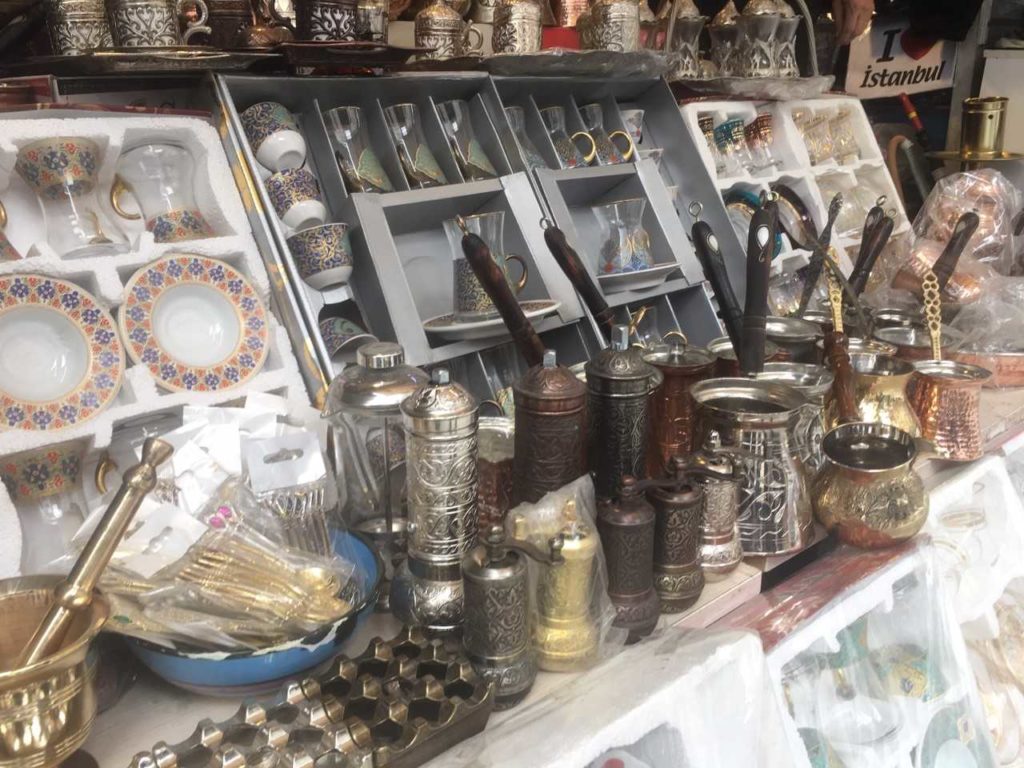 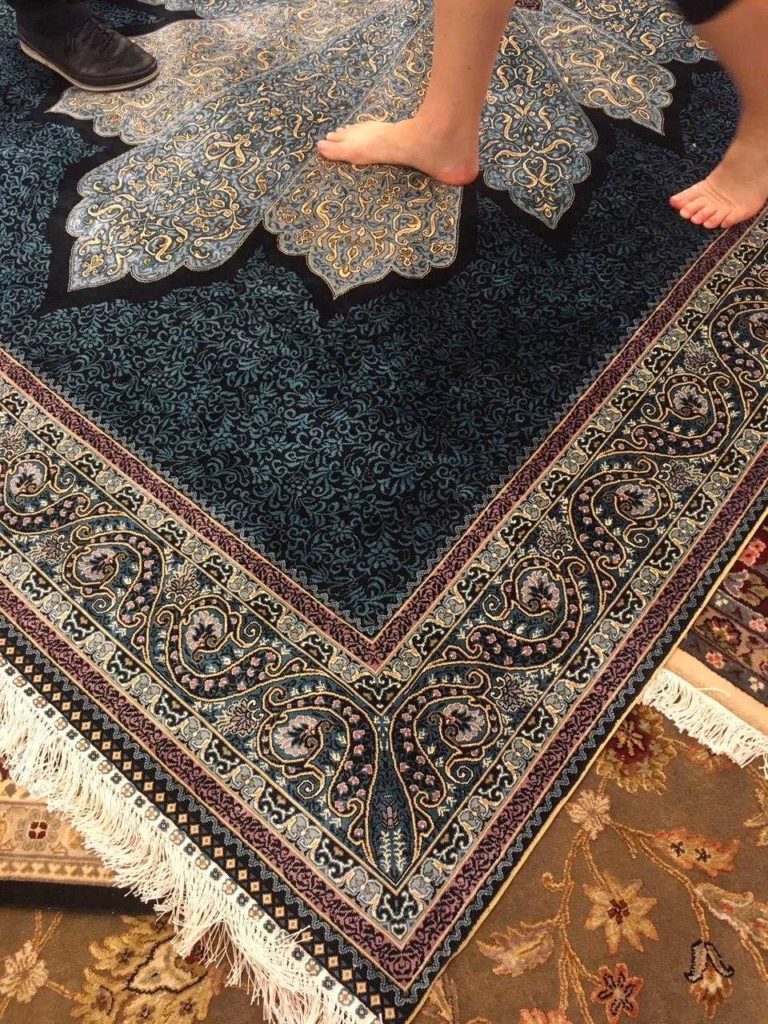 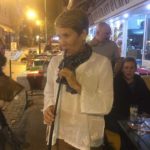 8 Glorious Nights in Turkey: My Itinerary with Peragrine Adventures US Ski Resorts are Growing for 2018-19

Plastic and Tourism: What You Need to Know